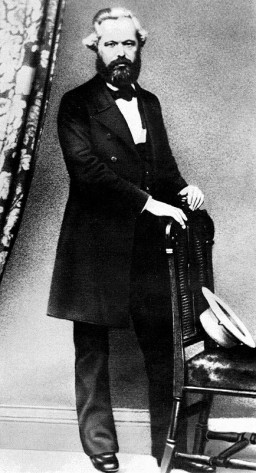 Today is, as you might be aware, the two-hundredth anniversary of the birth of Karl Marx in 1818. His bicentenary has prompted literally thousands of articles and blog posts about why Marx still matters, or doesn’t matter, or should or shouldn’t matter, and I have already made several contributions of my own to this genre. But what have struck me are the familiar images of Marx that accompany these articles. If asked to describe Karl Marx, most people, I would wager, would ‘think big’ and focus on the monumental: giant head, huge hair, impressive beard. The rest of his body doesn’t really get a look in, except the occasional joke about the boils on the bum that he suffered while writing Das Kapital.

But before this image of Marx became burned into the collective consciousness – before the gargantuan Soviet statues and the disembodied heads – the rest of Marx’s body posed somewhat of a problem for his first biographers. Here was a man who had spent most of his adult life writing, who had for most of these years been afflicted with a plethora of illnesses, and who spent most of his days in the study or the library. But his earliest biographers had to make his life appear relevant to the manual workers of Western Europe at a time, in the 1890s, when the iconography of socialist movements increasingly celebrated a masculine and athletic image of labour. This was, as historian Raphael Samuel argued, the era of ‘the proletarian giant, strong jawed with muscular arms and his sleeves rolled up’. It was also a period when, as Christopher Forth has shown in the case of France, the position of the ‘intellectual’ was increasing precarious as a ‘systematized and explicitly corporeal stereotype of masculinity reached its apotheosis at the end of the nineteenth century’. Put simply, Marx’s biographers had to turn a sickly scholar into a worthy proletarian hero. 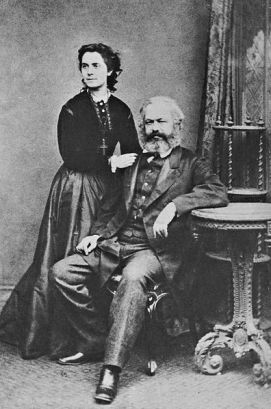 The first to take this challenge up was Paul Lafargue, Marx’s son-in-law and co-founder of the first avowedly Marxist party in France. His essay, first published in 1890, largely concentrated on Marx’s working life in the run-up to the publication of Das Kapital in 1867. Lafargue plunges into a description of his study, and the piles of books it housed, before switching focus to show the man himself at work: smoking heavily, pacing up and down the room, occasionally stopping for meals but often becoming so absorbed in his work that he would forget to take them: ‘His stomach had the suffer for the enormous activity of his brain. He sacrificed his whole body to his brain, thinking was his greatest enjoyment’. However, this evocative picture of physical suffering in the name of thought was immediately followed by a celebration of the ‘very strong constitution’ which allowed for ‘such exhausting intellectual labours’. Marx was:

in fact, very powerfully built. A man above the average height, he had broad shoulders and a deep chest, and his limbs were well proportioned on the whole, though his legs were rather too short for his body (as is often the case among members of the Jewish race). If he had practised gymnastics in his youth, he would have become an extremely powerful man. The only physical exercise he took was walking. He could walk for hours, and even climb hills, talking and smoking the whole time, without showing a sign of fatigue. It may be said that he did his work while walking in his study. Only for short intervals would he sit down at his desk in order to commit to paper what he had thought out while pacing the floor.

Karl Marx’s legs: too short for his body, apparently a marker of his Jewish ancestry, but the engine of his thought, powered by a deep chest.

In later biographies, which started appearing in larger numbers after Franz Mehring’s first full-length treatment in 1918, Marx’s labour on Das Kapital was transformed into a superhuman feat. Achille Loria’s biography, translated into English by Eden and Cedar Paul in 1920, drew attention to the ‘gigantic toil’ and ‘incredible labour’ that it represented. Loria claimed that ‘in all its fibres, the book seems to be the offspring of an unfathomable and transcendental union between superhuman labour and superhuman pain’. In 1927, David Riazanov, the head of the Soviet Marx-Engels Institute agreed, and claimed that while Capital was the product of physical endurance it was ultimately left unfinished due to the effect writing had on Marx’s body, as ‘the mighty organism, once capable of superhuman labour, was gradually becoming weaker … Before Marx his great work lay in the rough’.

Yet, even as he aged, Marx’s legs remained an unlikely source of strength. E.H. Carr (1934) acknowledged that the ‘sheer physical labour of writing’ took its toll. But, it was stressed:

Marx was no weakling—a live brain in a puny body … His physique was uncommonly robust; and his rather short legs were sturdy and active enough. He celebrated one of his convalescences, at the age of forty-five, by walking the seventeen miles from Margate to Canterbury … in less than four hours.

So spare a thought today for Marx’s rather short legs. While his head ‘displayed the assurance of a full-bearded manhood’ (C.J.S. Sprigge, 1938), according to Marx’s biographers, without his legs he wouldn’t have written anything for us to argue about.

I’m currently writing an article provisionally titled ‘Beards, Boils and Fat Books: Karl Marx’s Capital and the Authorial Body’ in which Marx’s legs play a brief but important role, so all feedback is welcome.