My Arty-Farty Summer, or Why Historians Should go to Galleries

I fairly recently came across a school report where I had, when forced to make a ‘pupil comment’, moaned that ‘I’m really rubbish at source work. I spend ages looking at paintings and never find anything to say’. My History teacher informed my parents that ‘Catherine is rather better at interpreting sources than indicated above’. But I would say that would rather accurately sum up my attitude to visual sources until the present day. That doesn’t mean that I don’t try: my next project will make quite a lot of use of photographs and film – in a meaningful way, I hope, and not just as pretty pictures – and I’m starting to get to grips with it. But it is still something that I struggle with sometimes: I think my identity is so caught up with words that my visual literacy has always seemed to lag behind.

The teenager who wrote that comment about being rubbish at reading paintings, though, was not, however, anti-art. I was, at that very same time, really into the ‘young British artists’ after having visiting a exhibition in Manchester with my art class which included stuff by Damien Hirst and Chris Ofili, at which we’d cut out our fingerprints in lino and made prints with them, after a talk one of the artists about identity which completely captivated me (apparently my fingerprint is particularly neat). I remember, about that time, forcing my poor dad to take me to see the shark in formaldehyde. The Liverpool Tate was my favourite day out (coupled with The Beatles Story), with Bridget Riley’s paintings being my favourite. So I have always liked really looking at art – especially twentieth century onwards – even if I have considered myself to be rubbish at ‘reading’ it. 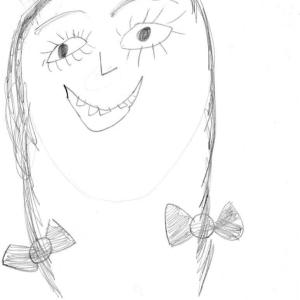 Self-Portrait of the Author as a Young Child (1986)

Today, after having visited two exhibitions that have made a real impression on me, it came to me: I am not rubbish at ‘using’ art as a historian. I just use it in a different way. It makes me think. What it makes me feel can often make me think about a topic I’ve been working on from a slightly different angle, or suddenly help me to make connections I wouldn’t have necessarily thought about otherwise. It might be a response to a particular image, object or film but more often it is a response to a collection of works, and the ideas behind that collection or curation. Sometimes it can aesthetically illustrate something that I know as a historian and is already there in the historiography, but in a way that might bring it alive for students.  For instance, the brilliant Portraying a Nation exhibition at Tate Liverpool juxtaposes the very different paintings of Otto Dix and the photographs of August Sander (the amazing People of the Twentieth Century) to show Weimar Germany as complex and confusing, both ultra-modern and deeply conservative. Sanders’ photographs might support Benjamin Ziemann’s argument that ‘modernity of metropolitan culture in Berlin, and its significance for Weimar Germany more generally, have been overestimated, and … —in cultural terms—Weimar was Weimar: it is best represented by the small town in Thuringia.’

So, art can help me to discuss ideas about history. But it can also help me to think about how – and why – I write history in the first place. A few years ago, I was slightly involved in a exhibition at the Manchester Cornerhouse by Phil Collins called Marxism Today. I chaired a discussion of Marx’s relevance (in 2010). But the real inspiration was a single conversation with Phil in the cafe. We spoke about how we were both fascinated with how this all encompassing ideology became tied up with the everyday minutiae of people’s lives, Phil with his ex-Marxist-Leninist teachers who ended up setting up dating agencies and me with my dialectical dancer. We were interested in similar ideas and that conversation helped me to articulate what I was trying to do.

This summer, I am working with the artist Will Knight to look at newsagents. Will has been doing some beautiful drawings of Glasgow newsagents of which there is an exhibition at the New Glasgow Society opening on the 11th August. I’ll be contributing to the exhibition with discussion and a bit of writing. I am excited about this because Will has already influenced my thinking without even knowing it, as I have become more concerned with shop fronts and displays in my research. Hopefully, this inspiration will go both ways. Watch this space.

Anyway, this was a very long–winded way of saying something very simple: historians don’t just need to think about art as a ‘source’. It can be that, but it can be much more: it can be collaboration, perhaps an actual collaboration between the artist and the historian, but more likely a silent one, with the work sparking an idea, even across centuries. So I end with a plea to my students (or maybe the one who might see this): Derby is full of art this summer. There is the Machine Made Robot and AI exhibition at QUAD, the Weeping Window poppies at the Silk Mill, the Finding Lines exhibition at Derby Museum and Art Gallery, and always, always the amazing Joseph Wright, also in the Art Gallery, and probably much more. 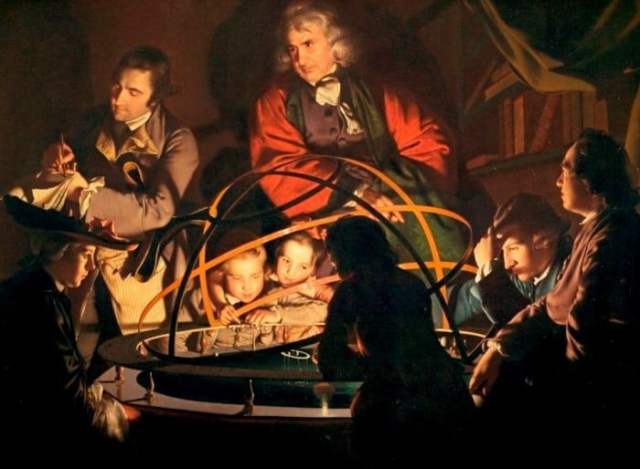 A Philosopher giving a Lecture on the Orrery in which a lamp is put in place of the Sun (1766), by Joseph Wright of Derby. Derby Museum and Art Gallery.

You probably don’t need me to tell you to go and see them. But if you’re like me, and think you might be a bit rubbish with art, give it a go and see where it takes you. One of the themes of the Finding Lines exhibition is confronting your inner critic: that goes for consumers of art as well as creators.

This entry was posted in Uncategorized. Bookmark the permalink.