After an absence of six months, I have decided to use this blog as a kind of notebook again. From September, I am co-teaching a third year course on ‘Historians and Material Culture’. Having learned that the best way to think through things is to try to teach them, I am really looking forward to this experience, not least because my colleague comes to material culture with a background in archaeology, medieval studies and eighteenth-century history (isn’t that great?!), and I come to it with the sensibilities of a modern cultural historian. We will also be genuinely co-teaching – with two of us in the same room – rather than doing tag-team lectures. This is really exciting because I think this will lead to a real conversation in the classroom, with us learning from each other as well as from the students.

With this in mind, I went to a wonderful conference yesterday called ‘Objects and Remembering’. I gave a paper on Marxist marginalia and what I think it can tell us about how British Marxists used their books to shape personal identities, cement relationships, and pass down political attitudes and practices over several generations. 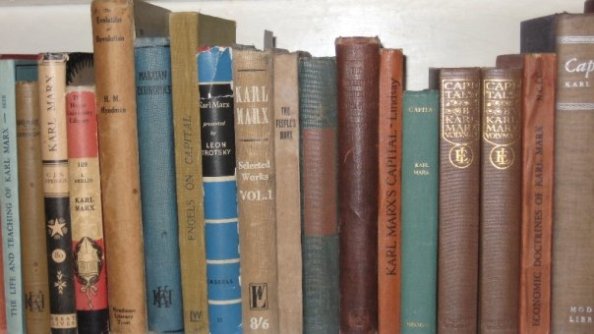 The programme is here. I urge you to go and Google every name on it (excluding mine – my paper was a show and tell rather than anything amounting to much!) and read their work. There were too many excellent papers to go into detail, but I should note that Layla Renshaw‘s paper on the exhumation of mass graves of the Spanish Civil War is, as I recall, the first conference paper of my career to move me to tears. Renshaw perfectly conveyed the charged atmosphere of these digs while critically analysing the emotional processes and politics at play. It was fascinating to see how both families of the deceased and archeologists fixed on material objects – not only those that were actually found in the graves but those which were absent, having being stolen by their murderers – as a vehicle of memory. Her book is now top of my reading list, alongside the work of Gabe Moshenska. Gabe’s range of interests as a public archaeologist is astonishing, but I was particularly struck by his discussion of how much the term ‘collective memory’ obscures more than it explains, flattening the complexities of multiple individual experiences. I was slightly embarrassed to remember that I had, earlier in the day, myself used the phrase ‘a form of radical collective memory’ without really thinking about what I meant by that. Although he wasn’t referring to my paper (which he was actually rather too nice about!), when Gabe said ‘we can do better than that’, I felt that he had given me permission to think more deeply and carefully about what is actually going on. I reckon that counts as a productive day in anyone’s books!

So, this summer, expect a few blog posts where I use some things to think with, as and when I feel like it.

This entry was posted in Uncategorized. Bookmark the permalink.

1 Response to Objects and Remembering